Greece President: Turkey has to come to grips with past and apologize

Russian Foreign Minister Sergei Lavrov: “We will insist that the Syrian army occupy the entire territory of the country as quickly as possible” 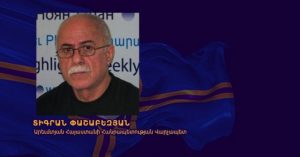 Time for compensation for the Armenian Genocide

On May 24th, 1915 the governments of England, France and Russia came up with special joint declaration, where three large countries publicly characterize the Turkish actions against Armenians as crimes against “humanity and civilization” for which “personal responsibility is laid on every member of the Turkish government who participated in the massacres”.

In fact, Turkey was one of the first to condemn the Armenian Genocide. In 1919-1920 the special Military Tribunal of Constantinople organized a trial of the leaders of the Young Turks, presenting them with two charges: the involvement of the Ottoman Empire in the war and the organization and implementation of the massacres, the genocide and the deportation of Armenians – subjects of the empire.

The Armenian Genocide was recognized and condemned by 35 UN member states, including the Russian Federation and the United States, as well as the leading countries of Latin America and Europe, several UN committees, the Council of Europe, the European Parliament, the World Council of Churches, the Permanent Tribunal of Peoples, etc.

Hamidian pogroms of the Armenians of 1894–1896 condemned by prominent figures of that time – Jean Jaurès, Victor Berard, Anatole France, Johannes Lepsius, Lynch and others.

“The State Duma of the Federal Assembly of the Russian Federation, based on irrefutable historical facts testifying to the extermination of Аrmenians in Western Armenia in 1915-1922, following the spirit and letter of the Convention on the Prevention and Punishment of the Crime of Genocide adopted by the United Nations (December 9, 1948) and the Convention on the Non-Applicability of Statutory Limitations to War Crimes and Crimes against Humanity (November 26, 1968), striving to revive the humanistic traditions of the Russian state , recalling that at the initiative of Russia, the great European powers in 1915 qualified the actions of the Turkish Empire against the Armenian people as a “crime against humanity”, noting that the physical destruction of the fraternal armenian people in their historical homeland was carried out in order to create conditions for destruction Russia, condemns the organizers of the extermination of armenians in 1915 – 1922, expresses its sympathy for the armenian people and considers April 24 as a day of remembrance for the victims of the genocide.”

In Resolution No. 296 of the House of Representatives of the US Congress on October 29, 2019, “Confirmation of the US Position on the Recognition of the Armenian Genocide by Turkey”, it is noted:

“Affirming the United States record on the Armenian Genocide.

Whereas the United States has officially recognized the Armenian Genocide,

Whereas the Elie Wiesel Genocide and Atrocities Prevention Act of 2018 (Public Law 115–441) establishes that atrocities prevention represents a United States national interest, and affirms that it is the policy of the United States to pursue a United States Government-wide strategy to identify, prevent, and respond to the risk of atrocities by “strengthening diplomatic response and the effective use of foreign assistance to support appropriate transitional justice measures, including criminal accountability, for past atrocities”:

Now, therefore, be it

Resolved, That it is the sense of the House of Representatives that it is the policy of the United States to –

(1) commemorate the Armenian Genocide through official recognition and remembrance;

(2) reject efforts to enlist, engage, or otherwise associate the United States Government with denial of the Armenian Genocide or any other genocide; and

Another decisions, treaties and the Arbitration Decision on the Rights of Armenians adopted in the years 1918-1920 by the international community:

–    The Decree of the Government of Russia (Council of People’s Commissars of Russia) «About Turkish Armenia» («About Western Armenia») of January 11, 1918;

–   The decision of the Supreme Council of the Allied Nations during the Paris Conference on de facto recognition of the independence of the State of Armenia of January 19, 1920;

–    The decision of the Supreme Council of the Allied Nations on de jure recognition of the independence of the State of Armenia of May 11, 1920;

– Declaration of Independence of Armenian Cilicia of August 4, 1920;

–    The Arbitral Award of the 28th President of the United States of America Woodrow Wilson of November 22, 1920 the full name of which is «The decision of the President of the United States Woodrow Wilson on the establishment of the State border between Turkey and Armenia, the issue of Armenia’s borders maritime access and about the demilitarization of the Turkish territories adjoining the Armenian border».

Taking into account the following Statements submitted by the Republic of Western Armenia (the State of Armenia) to the United Nations:

1)  Application for membership of the Republic of Western Armenia (the State of Armenia) in the United Nations of May 25, 2018.

2)  Statement of the Republic of Western Armenia (State of Armenia) to the United Nations «On the implementation of the Arbitral Award of the 28th President of the United States of America Woodrow Wilson of November 22, 1920 “The Decision of the President of the United States Woodrow Wilson on the establishment of the State border between Turkey and Armenia, about Armenia’s excess to the sea and the demilitarization of adjacent Turkish Armenian border territories”, aimed at establishing the Republic of Western Armenia (Government of Armenia) within the territories established by the Arbitral Award of the 28th US President Woodrow Wilson of May 29, 2018;

4) Statement of the Republic of Western Armenia (Armenia)to the United Nations “On demarcation of the border between the State of Armenia and the Republic of Azerbaijan” of August 7, 2019.

These Statements in fact relate to the decisions already taken by the international community regarding the rights of the Armenian people but have not been implemented yet.

All the facts cited confirm the essence of the Statement adopted on October 19, 2014 at the 2nd session of the 1st convocation of the National Assembly (Parliament) of Western Armenia, “About the strategy of the State of Western Armenia (Armenia) on the Genocide of the Armenians recognition, condemnation and compensation issues”, in which says that “you just have to admit that the compulsory process of recognition of the Armenian Genocide is completed, and that we need to go to the international process of condemning the Armenian Genocide and compensation (reparation) for it.

Prime Minister of the Republic of Western Armenia (Armenia)